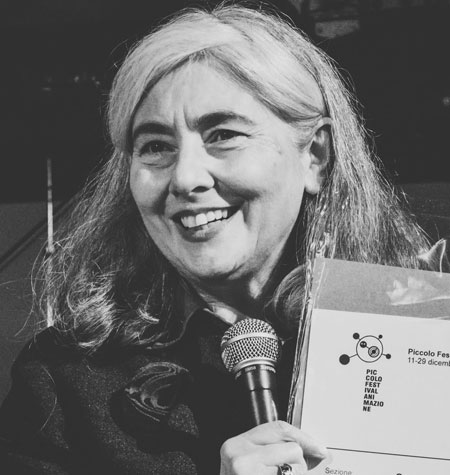 The idea of the Animation is based following these themes: – Birth of Tesla; – The great inventions; – Conflict with Edison; – Eccentric personality; – Life in constant balance between science and magic; – Decline, loneliness and inexorable end.

The Music of the Performance was played by Dragana Gajic, student of the Conservatory of Trieste.

The project, realized in April 2019, was possible with the collaboration of Istituto Italiano di Cultura of Belgrade, La Fabbrica del Vedere of Venice, Associazione Viva Comix and Piccolo Festival Animazione and with the contribution of
Law 212/2012.

Paola Bristot, graduated in Discipline Arti Musica Spettacolo, in University of Bologna (1985) and specialized in Contemporary History Art in University of Bologna (1991). She is professor of History of Art at the Academy in Venezia. Like president of the Viva Comix association organizes many exhibitions concerning comics, illustration, animation and visual arts. She is the Artistic Director of the Piccolo Festival Animazione (12thedition) in Trieste, Udine, Pordenone, Gorizia and Venice. She curated with Andrea Martignoni the 5th DVD “Animazioni“(2010-17, Viva Comix, Ottomani), anthologies of contemporary Italian short film. Like art director produced the experimental film “Re-cycling” (Arte Video, Viva Comix 2014).